The Transport Secretary’s historic drive-through comes a week after Chancellor Jeremy Hunt visited HS2’s Interchange station site, in recognition of the progress the project is making, with almost 30,000 jobs now supported by HS2 and over 2,700 businesses awarded contracts.

Rt Hon Mark Harper MP, Secretary of State for Transport said: “It was absolutely extraordinary to see first-hand the sheer scale and craftmanship of this monumental project which will positively transform the lives of hundreds of thousands of people across the North and Midlands.

“As well as boosting connections, regenerating communities and creating tens of thousands of jobs, tunnels such as this have been designed to ensure Britain’s biodiversity and countryside are preserved during construction and for many decades to come.”

A 2,000 tonne tunnel boring machine (TBM) dug the one-mile tunnel taking the HS2 rail line under Long Itchington Wood in Warwickshire, protecting the ancient woodland above. The TBM - named ‘Dorothy’ after Dorothy Hodgkin who in 1964 became the first British woman to win the Nobel Prize in Chemistry - broke through the south portal tunnel wall in July this year. The tunnelling team worked around the clock for 7 months, placing 790 concrete rings to build the 10 metre diameter tunnel.

Since the summer breakthrough, a 300-strong site team from HS2’s construction partner Balfour Beatty VINCI have pulled the TBM gantries back through the tunnel, for the TBM’s relaunch to start the second bore last week.

Mark Thurston, HS2 Ltd’s CEO said: “It was a pleasure to welcome the Transport Secretary to site today as the first member of the UK Government to travel the entire length of the completed one-mile tunnel under Long Itchington Wood. This is another fantastic milestone for HS2, demonstrating the huge progress we’re making in the West Midlands, where nearly 7,000 people are working on the project.

“Travelling from end-to-end of our first completed tunnel just shows the unstoppable momentum on a project that is providing essential skilled jobs for people today, and in the future will provide zero-carbon public transport and help to level-up the Midlands and North.”

Hosted by HS2 Ltd’s CEO Mark Thurston, the Transport Secretary was joined by two Balfour Beatty VINCI apprentices on the tour – 26-year-old Thando Makombe from Coventry who is studying towards a Level 3 Laboratory Technician Apprenticeship, and 24-year-old Rintesha Shekh from Chelmsley Wood, who undertook a Kickstart placement with BBV and is now on a Quality Practitioner Apprenticeship.

“It was a great opportunity to explain how we delivered this incredible feat of engineering – an achievement that wouldn’t have been possible without the project team’s hard work, dedication and expertise. Now that our second tunnel bore is well underway here at the same site, we look forward to seeing the next breakthrough in summer 2023.”

The one kilometre square north portal tunnel site in Warwickshire, managed by Balfour Beatty VINCI is one of HS2’s largest construction sites in the Midlands and is contributing to massive job creation in the region. Around 6,800 people are already employed in HS2’s construction in the West Midlands, with thousands more jobs supported through the wider supply chain.

540 people who were out of work in the West Midlands have been helped into jobs on HS2, and 340 apprentices from the region have started new roles on HS2. BBV has joined forces with local colleges in Solihull, Dudley, Wolverhampton and Walsall to increase the number of industry placements it offers to T-Level students.

The tunnel, which preserves the ancient woodland above, forms a key element in how HS2 is managing environmental impacts through the design of the railway, protecting Britain’s precious wildlife habitats. Long Itchington Wood is classified as a Site of Special Scientific Interest (SSSI) with complex ecosystems that have taken hundreds of years to establish.

Excavation of the twin bore tunnel will produce around 500,000 tonnes of mudstone and soil, which is being processed at an on-site slurry treatment plant and separated out before being transported by a 254 metre conveyer to be used to build embankments along the route of the railway. 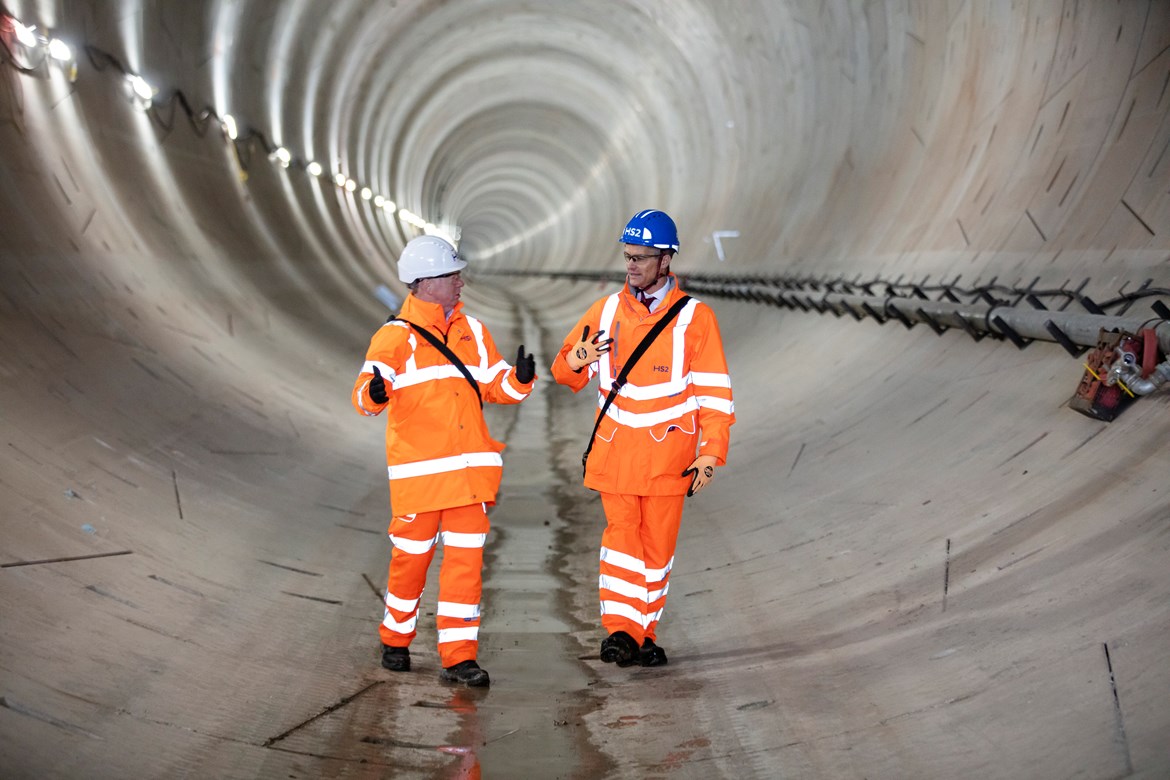