Balfour Beatty, the international infrastructure group, has been selected by Urbanest to deliver the Vine Street development; a new £85 million mixed-use student accommodation scheme in the City of London.

Occupying the entire site is a two level basement containing the exposed remains of the Roman city wall and bastion, which will house a gallery enabling the public and building users to view the monument, in addition to a café.

At peak, the project is expected to employ over 250 people including 10 apprenticeships and five graduates.

The ground floor of the Vine Street building will accommodate the student and office reception, utilities, loading bay, substation, and incubator space for entrepreneurial start-ups.

“Our selection for the Vine Street development is testament to Balfour Beatty’s ability to operate in a confined city centre location to transform an historic site into one of the most exciting mixed-use student housing projects in London.”

Following a pre-construction services agreement, which commenced in October 2017, full works are planned to start this year with completion expected in 2021. 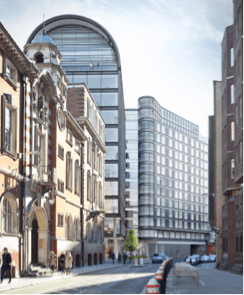